SUNBREAKS ON THURSDAY AFTERNOON but too much wind for photos, then rainy and gray Friday. It’s fun to take a look around to see what has burst into being while we were gone. The garden has exploded into green and colorful blooms. March is nearly gone!

Saturday began with a walk to Lincoln Park with the neighbors t0 started the day right. We watched a gray whale feed in the shallows, about 25 feet offshore! Lots of folks taking in this unusual sight so close. It had been in the cove for an hour or more judging by all of the comments overheard.

Once back at home the challenge was to decide which chore needed to be done first. All vines needed tying up attention and the tree peony needed staking–there are five flower buds this year, the most ever since transplanting in 2001. A little weeding, some pruning, and then time for photographing since the wind was very light, so light in fact that the sailboats heading north after the morning’s southbound race had dropped their sails and were motoring.

My garden is really several small gardens, each distinct in the amount of sun, shade and types of plants. There are six ‘gardens’ on the east side of the house and seven plus the vegetable garden on the west side. In a 100’x 50′ lot I’ve managed to find room for lots of plants! And isn’t there always room for one more?

After Saturday’s lovely weather nothing but rain and wind through Tuesday with a nice break yesterday.So, here is what grew and bloomed while we were away.

Anemone oregana from Grandma T’s garden. A hitch hiker with some cyclamen corms The leaves die away and the plant goes dormant over the summer.

The last of the three camelias, this one is on the south property line; no idea as to the cultivar. Must be at least fifty years old.

Corydalis ochroleuca. I love the little white flowers and lacy, ferny leaves. Spreads, but easy to remove. Likes any situation.

An old rhododendron that lived here long before us and therefore a legacy planting! Vigorous and lots of blooms. 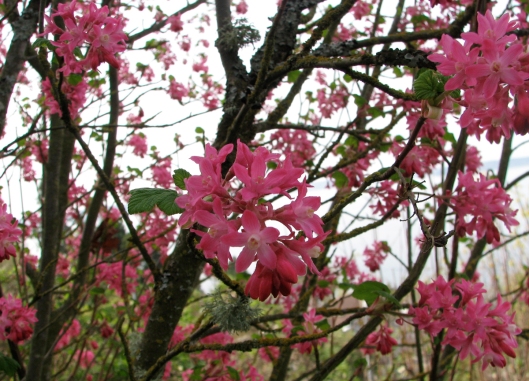 Ribes sanguieum, red flowering currant. This is a native plant and this particular one came from Grandma T’s garden as a little volunteer, not more than a foot tall. Twelve years later it is more than eight feet tall. The humming birds love this one and its blooms stay a long time.

Sanguineria canadense, bloodroot. A dainty, bloomer but short lived flowering–today it is gone.