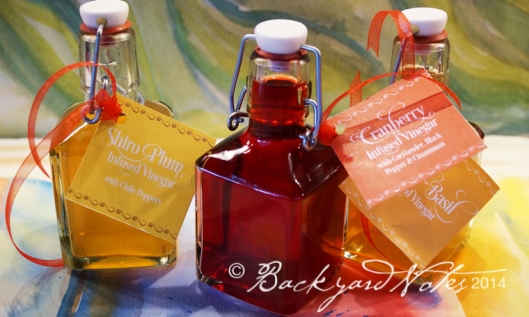 PART OF THE PLEASURE OF PRESERVING is in the creation, being able to savor flavors you love throughout the year. I like infusing vinegar and vodka with fruit and herbs to capture those favorite flavors of summer. Depending on the fruit or fresh herbs, I use rice, white wine or red wine vinegars as my infusion base. Chile peppers and many herbs seem to pair better with rice wine vinegar. I generally infuse about a quart  of vinegar at a time; enough to cover the fruit in a large jar (those marinated artichoke jars from Costco are pretty handy for this). Salads are of course the most obvious use for these infused vinegars, but sautéed or steamed vegetables are also perked up with them. I prefer to make dressings for salad as I need it, so I can be flexible and tailor the dressing to the salad. 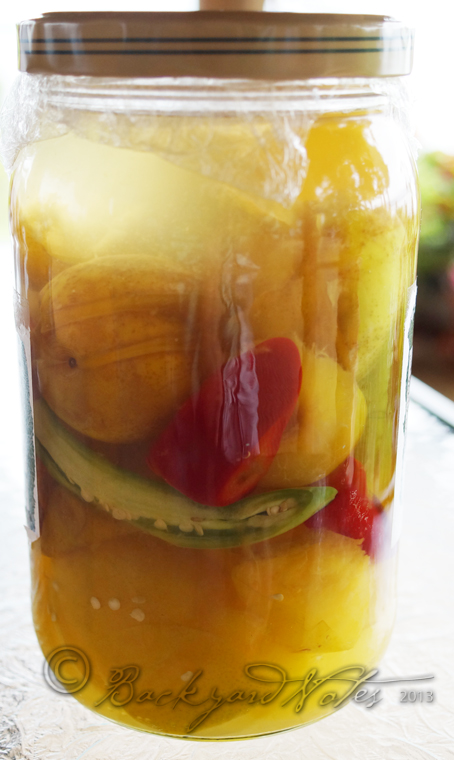 PLUMS: In 2013 I had plenty of Shiro plums donated by my mother’s neighbors. I made plum jelly, plum butter and infused white wine vinegar; I made two versions of the plum vinegar, one with hot chile peppers and another with white peppercorns and corriander seeds. I left the fruit whole and slit the plums from ‘pole-to-pole’.

PEACHES: I made Peach-Basil vinegar since I bought a 20 pound box of peaches and had some to spare after making peach-basil preserves and brandied peaches. I cut the peaches into big chunks and included the pits.

CRANBERRIES: One of my sisters lives in cranberry country on the Long Beach, WA peninsula and she brought me several pounds of them at the end of October. After making (and canning) cranberry sauce there were cranberries left to infuse vinegar. I used equal parts red and white wine vinegar and added corriander seeds, black peppercorns and cinnamon stick. And since there were so many cranberries I infused vodka too (with a cinnamon stick).

I find that six-to-eight weeks is about right for infusing the flavors; start tasting at about four weeks, the minimum. When it is time to strain the vinegar from the fruit I use a super fine strainer like a chinoise for the first straining. I do not press on the fruit to release any liquid left in the fruit as it tends to make the vinegar cloudy. Second and subsequent straining is done using paper coffee filters (rinse and compost) or a super-fine mesh coffee filter, until it is clear to my liking. Decanted into small bottles, infused vinegars make nice gifts for people who like to cook. (I save a lot of small, nice looking bottles.)

In past years I have also made cherry, blackberry with black peppercorns, raspberry, and apricot. I tend to go a bit heavy on the fruit so that those flavors are pronounced against the vinegar. Plums, peaches, and apricots tend to have have more subtle flavors than raspberries and blackberries, so you could use a heavier ratio of fruit to vinegar.

Since pomegranates are still in the markets, I think I’ll give them a try. At the beginning of last month I started a batch of pomegranate and cardamom infused vodka. That seems to be a good pairing of flavors.