WE HAD A GRAND TIME IN GRAND TETON N.P. We could see the Tetons from our campsite and watched them light up mornings and evenings. The yellow leaves of the aspens and cottonwoods were absolutely luminous. The evening light just after sunset was ethereal; soft and gauzy with hints of lavender. I felt like I was sitting in a Thomas Moran painting. Just have to share a few photos.

The campground is alongside the Gros Ventre River (grow-vant) where we walked in the mornings looking for moose–along with dozens of photographers as it turned out. Our first morning out we got lucky–twice.

The first encounter was a young bull moose who looked to be bedding down for the morning.

Farther on, out at the river we spotted a full grown bull standing in the water. 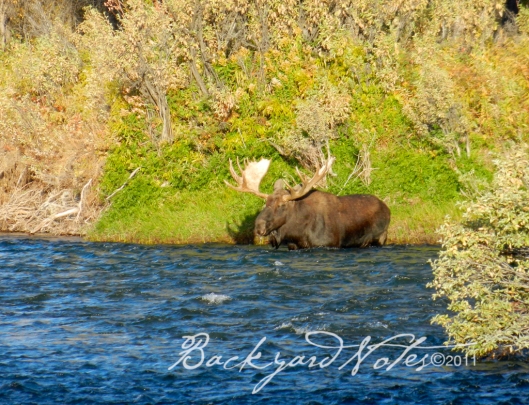 As we slowly and quietly moved in a little closer we found a glut of photographers, some of whom had just witnessed a fight between this bull and another. This challenger was apparently soothing his wounds. We saw the dominant bull a couple of days later; he had broken part of his antlers in the scuffle.

One afternoon we took a hike up to Taggart Lake at the base of the Tetons. I don’t think that a hike gets much better than this. 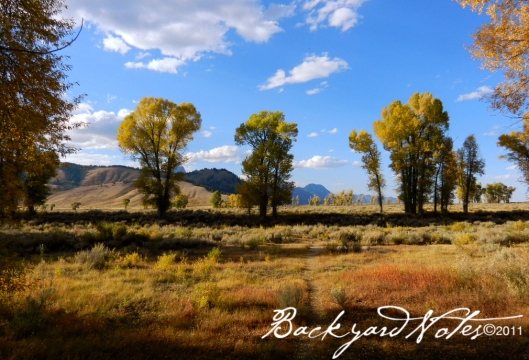 Back at the Gros Ventre campground with late afternoon shadows adding a little more drama to the scenery. 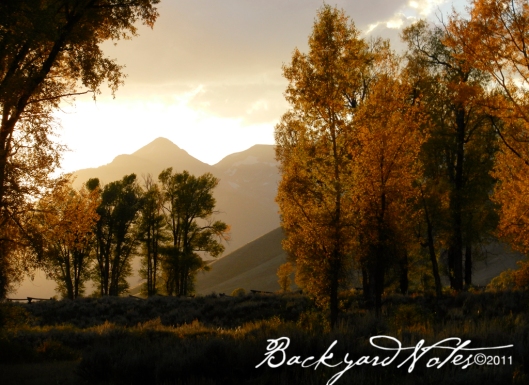 And the setting sun. It was so beautiful, made for painting.

When we were in Yellowstone we met some friends quite by accident and they joined up with us in Teton NP. On our last full day in the park we all did a hike around Two Ocean Lake. It seems that there is nowhere in the park where the Tetons are not visible. We even saw a group of three otters fishing in the lake! A wonderful way to end our trip.

Express your thanks to your local grocery and drugstore employees with a simple, tiny bouquet. They are taking a huge health risk everyday. Print and share your beautiful art on pre-perforated business card stock or other papers. Every time you pay for your purchase hand one to the person assisting you. A small bit of gratitude for a risky job. #Shareyourart #Saythankyouwithart #Gratitude #Thankyoutogroceryemployees #Businesscardart #Showyoucare #thankyoustoreclerks #thankyouwestseattlethriftway #thankyouwestseattleqfc #thankyouBartellDrugs
grow it cook it can it
Red Road Diaries